The history of the Paoletti Company began around 1910 in Folignano (Ascoli Piceno, Italy)

You are here: Home / History

The history of the Paoletti Company began around 1910 in Folignano

The municipal envoy Enrico Paoletti (born in 1880 and son of Luigi cobbler, cook and “philosopher” of the town also called “La Legge”), also manager of the tavern, decided to set up his own business giving life to a small production of carbonated soft drinks . In those days the usual consumption was the famous “quarter of wine with the gaseous”. However, the supplier of gaseous was often late with deliveries and it was probably this delay that led Enrico to produce his own drink to add to wine.  Despite the economic and social crisis of the post-war years and the very limited means, Enrico with undoubted qualities of entrepreneurship and imagination, succeeds in giving life to the first production of carbonated drinks.

in the factory set up under the paternal house, in the same rooms as the tavern, the first GASSOSE and SPUME are produced in the historic bottle with the glass ball that served as a cork. Many women from the town are used in production and glue colored labels by hand on the bottles in the evening as their last job. The drinks, placed in wooden crates, are distributed with a cart pulled by a horse in all the inns of Ascoli and neighboring countries. Two years after the foundation, the company begins to collect the first significant successes in the International Exhibitions of Industry and Labor of Milan and Rome.

Enrico Paoletti brings his products to the International Exhibition of Brussels where his production of “eaux gazeuses” is a great success, obtaining the Gran Palma d’Onore and the Gold Medal, recognitions that attest to the goodness of the products that since its birth they were characterized by the quality of the raw materials used. Enrico died prematurely in 1927 following a trivial fall from a horse and the company passed to the second generation (three brothers).

Among these, Enrico’s youngest son, Giovanni Cadorna Paoletti, places the solid mechanic knowledge acquired during the long military service as a self-referent commander at the service of the “Enrico Paoletti e figli”. Under his guidance, in the second half of the 1940s, production was significantly mechanized. The number of workers employed also increased in this period, reaching 40 units in the summer period. As demand grew, production also increased significantly, and the first war trucks for distribution, “Dodges” and “Chevrolets” were purchased.

Paoletti soft drinks, and in particular Gassosa and Spuma, are established throughout the Piceno area where they are widely distributed and the position in the firm’s market is strengthened. In the 1960s, production was transferred to Marino del Tronto in a renovated and expanded family oil mill. Following the purchase of a new automatic production line (the famous “Rigamonti and Villa” in Milan), the workforce drops to around twenty units even though production increases a lot. A third party production of important Italian companies such as the legendary “Fabbri” is also born. In the 1960s, the historic and heavy wooden crates disappear, replaced by plastic crates.

Later, PET will partially replace glass. The advent of PET (without bail, comfortable and more easily transportable than glass) however, leads to a crisis of small and medium-sized companies that are no longer able to compete with the large national and multinational companies that field an hourly production five times greater.

The greater capacity for automation and the large investments in advertising by large companies also contribute to increasing the difficulties of small Italian companies such as Paoletti, which from the 1970s until the early 1990s encountered one of the most difficult moments in its entire history. Following this crisis, between 1992 (the year in which Giovanni Cadorna disappeared) and 1999, the company and the brand were rented. Bad management of the brand by tenants leads to a further aggravation of the corporate crisis.

the two sons of Giovanni Cadorna, although coming from different professional experiences, however, wanted at all costs to keep the company alive with all its human capital and history. In fact, the brand is still significant for an entire territory where more than one generation has grown up with Gassosa and Spuma Paoletti.

Especially Giancarlo, giving up the last comfortable years of a splendid career as a bank manager, took the reins of the company, becoming his mind, his heart, his soul and often his arm. Thanks to its strength, its passion, its intelligence, its tenacity and its courage, Paoletti has grown a lot and is a reality that is present today on most of the national territory and is also penetrating in some foreign markets (Germany, Switzerland, France, Czech Republic, United Arab Emirates, Florida and Australia).

The company today produces in excellent factories that use water with the particular organoleptic and purity characteristics necessary to ensure the high, historical, quality standards of the products. Precisely this quality represents one of the main positioning tools available to small businesses and Paoletti identifies the excellence of its drinks as the essential requirement for the continuation of success.

Already in the 1920s, perfumed wooden barrels containing the various juices arrived in Ascoli from Sicily, strictly stored in the company and opened only at the time of the “secret” mixing with the other ingredients. Although this is now only a memory, the various generations at the helm of the company, have never diminished the search for the quality of their products, remaining faithful to the initial corporate philosophy. Despite some innovation, it is essential that every drink conveys to its consumers a constant reference – as far as possible – to traditional recipes, recalling in him the old flavors of the past.

In 2009 Paoletti soft drinks were included among the “Excellence Picene”, in the category of historical products of highest quality and prestige in the province of Ascoli Piceno. An award that has certainly comforted the efforts of the company Ascolana, always attentive to the care of each recipe.

As for the labels, since 1922 Paoletti had designed some that had the exclusive aim of communicating the brand and place of production. In the following years we realize that products can acquire even more value if associated with a precise image, capable of conquering the imagination and emotion of consumers. So was born Tina Frizzante, also known as “FrizzanTina”, a nice and “delicate” female figure of clear Italic origin, who appeared for the first time on the old foam bottles with colored enamel label on the glass.

Today Tina is the adult testimonial of Paoletti Drinks, on which she has reappeared since 2002 after a careful restyling. Her face, her look, her smile give her a diva allure of other times with an innate and spontaneous sensuality. Its presence has contributed significantly to the company’s growth.

The fame of the renewed testimonial has attracted the attention not only of national periodicals and newspapers (Vanity Fair, Republic, Friday of the Republic etc.) also of the director Sergio Rubini.

On the set of his latest romantic comedy, “The Black Man” (2009), set in Puglia in the 1960s, were the evocative images of Tina Frizzantina, the beautiful and sought-after Paoletti testimonial. Another film that brought the Paoletti brand to the big screen is the “Cosmonauta” (2009), by Susanna Nicchiarelli, where in the communist section of the Trullo in Rome toast to the first woman in space with a bottle of Spuma Paoletti. The products and the brand have appeared in the Canale 5 television drama “Tutti per Bruno” with Claudio Amendola, in the Rai 1 program “The best years” conducted by Carlo Conti and, thanks to our Alessio Paoletti who has lent to the game, as a hidden identity in the Rai 1 program “I soliti ignoti” conducted by Fabrizio Frizzi

From 2013 appears with recurrence in the Sky fiction, “I delitti del Bar Lume”, as one of the products for sale in the bar itself. In 2017, ancient versions of Paoletti bottles and our beer appear in the film by award-winning director Ridley Scott, nominated for three Golden Globes “All the Money in the World”.

Last but not least, the presence and appreciation in the fashion sector, with participation in various editions of the Pitti in Florence, collaboration for the catalog of “Duck farm” and in 2011, the presence at the World Fashion Fair in Paris.

Also present in the film “Viaggio con Alice” a 2018 film directed by Alessandro Capitani, with Alessandro Haber and Sara Serraiocco and in the fiction “L’Amica Geniale” is an Italian-American television series created and directed by Saverio Costanzo.

Bibite Paoletti on the set

Paoletti soft drinks at the Cinema  Paoletti belongs to that category of historical companies, which have experienced happy times and difficult situations. Born just after the end of the First World War, it lived in the middle of the Second, it passed with extreme obstinacy the crisis of 1970 and the most recent economic crisis of 2008. The ability of the company to get out of every shadow in the course of its long history, it is to be attributed exclusively to the human element, a true common thread between past and present.

Today, after Giancarlo’s recent and untimely death, his brother Pierluigi, his son Gianluca and his wife Serenella continue to pursue the entrepreneurial and personal values ​​that the Paoletti family has passed down for four generations and over a hundred years.

Since 2012, the Unioncamere Nazionale has registered the Company in the “Register of Historic Companies – The companies that have made the history of Italy” 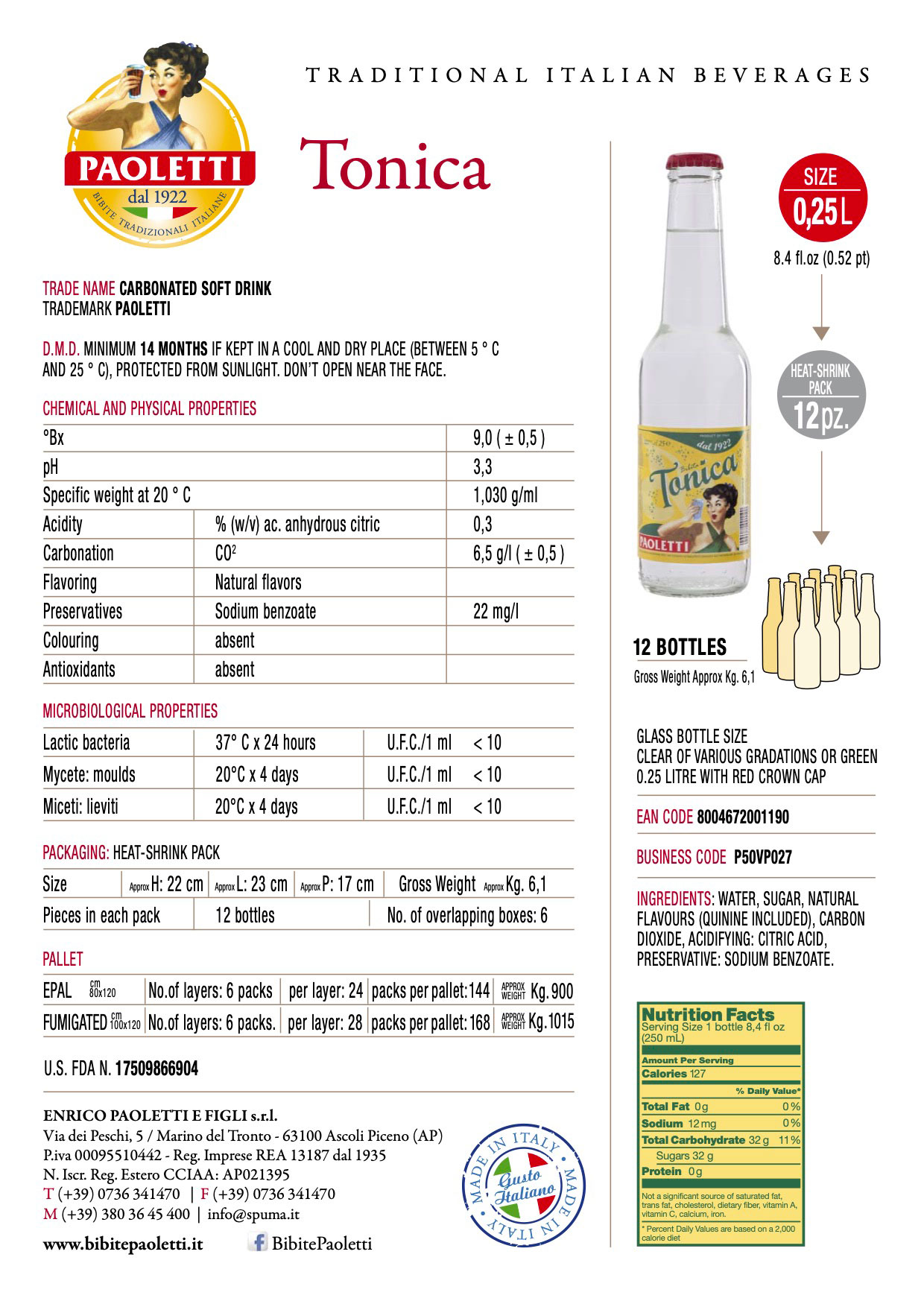 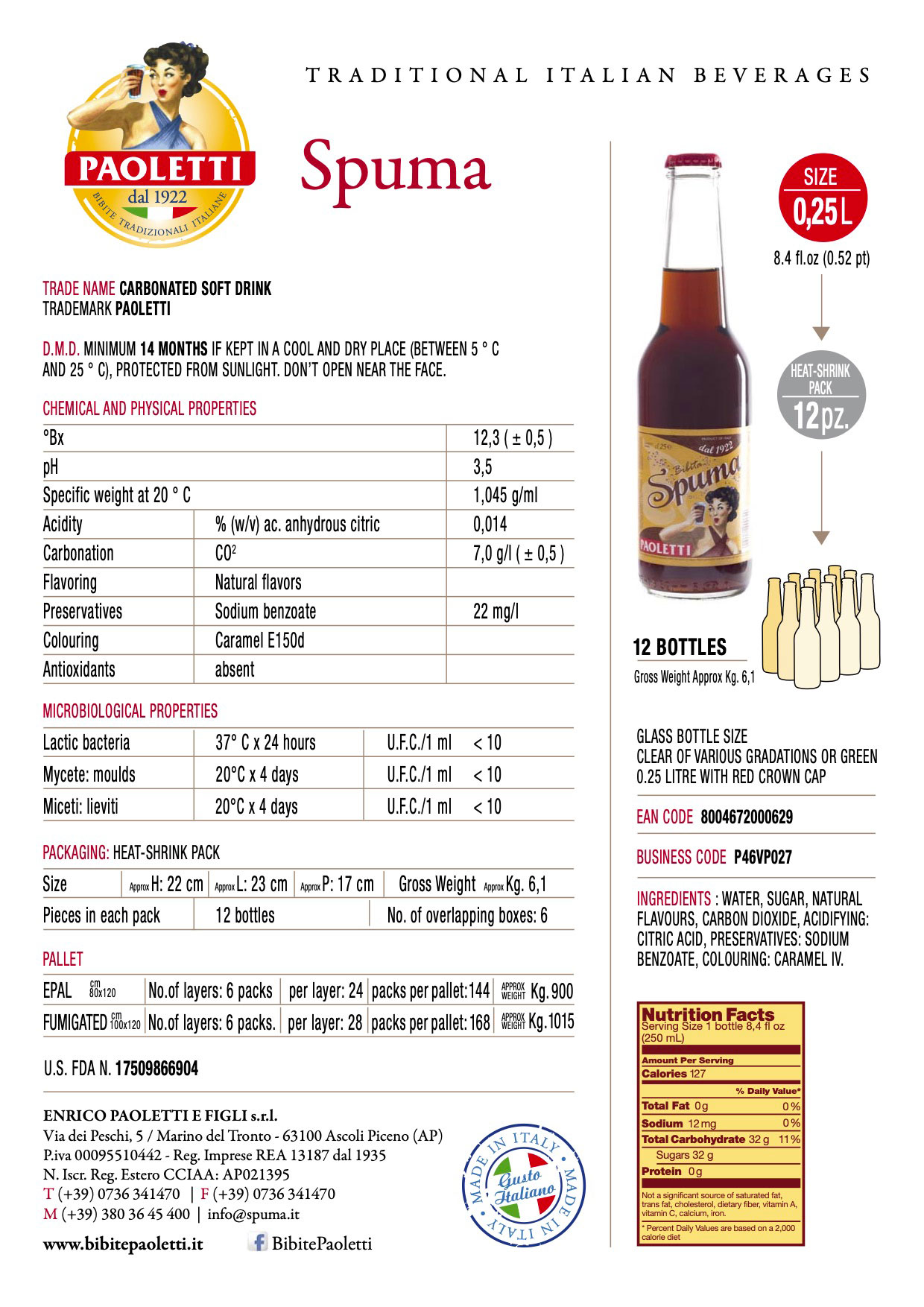 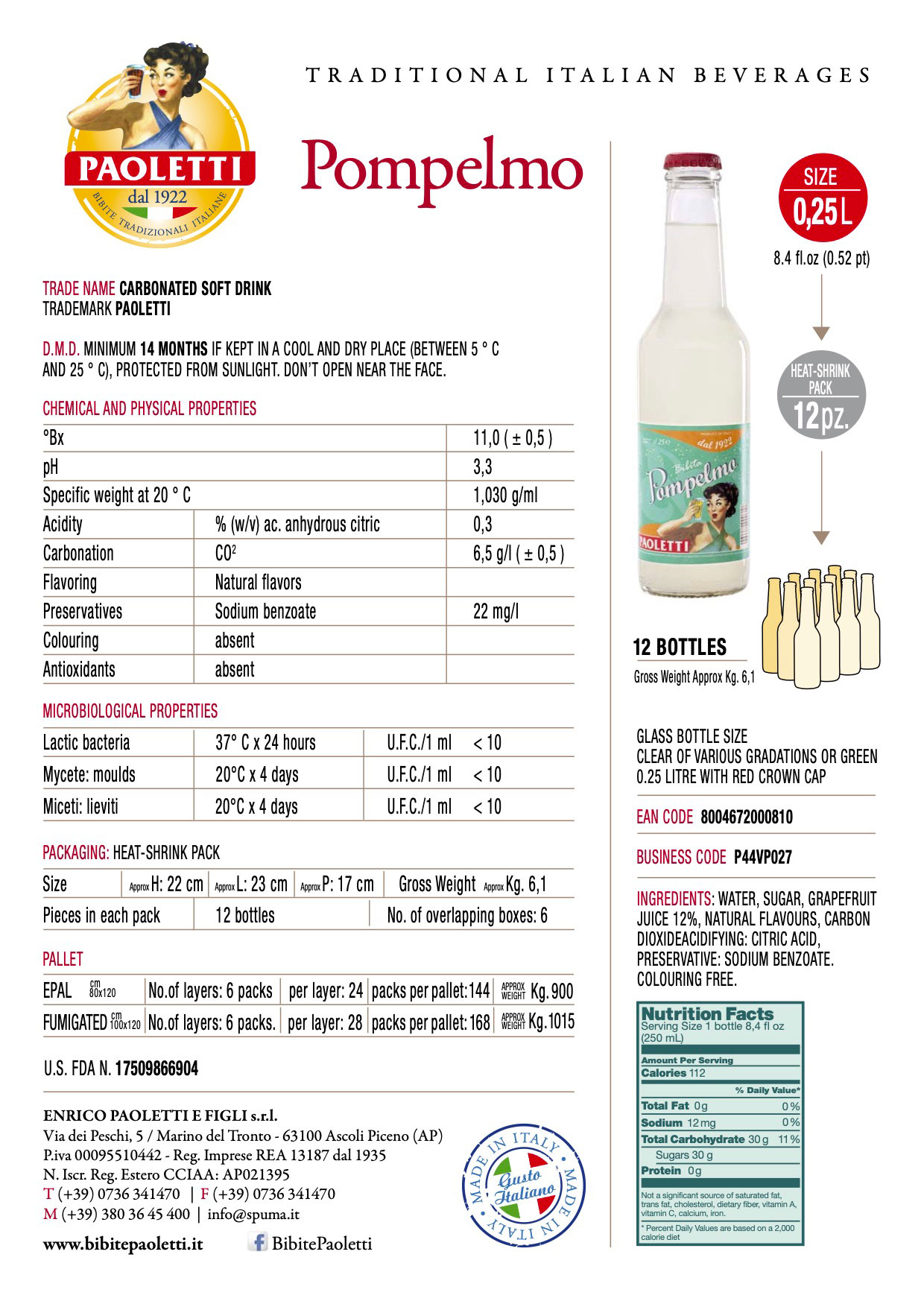 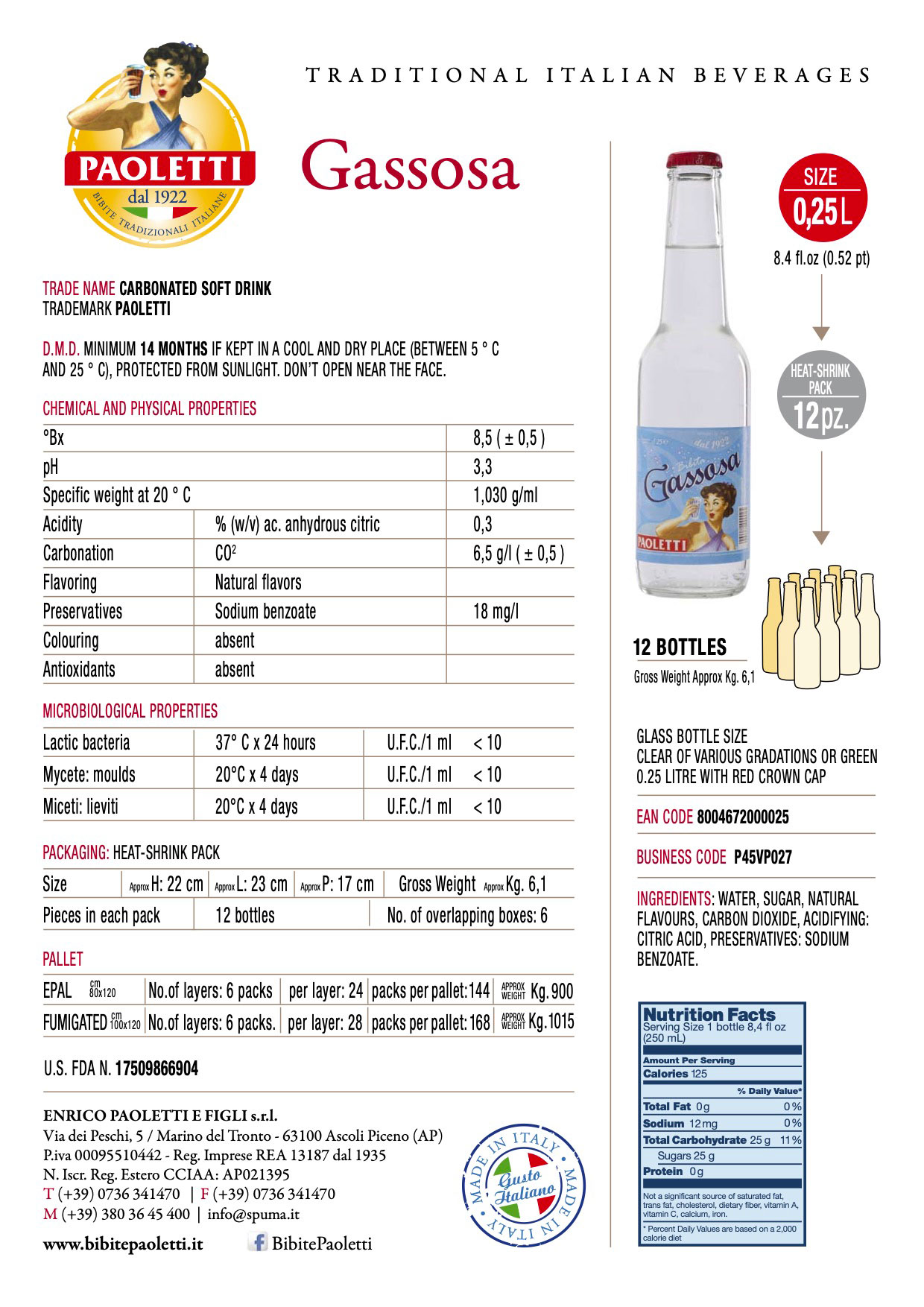 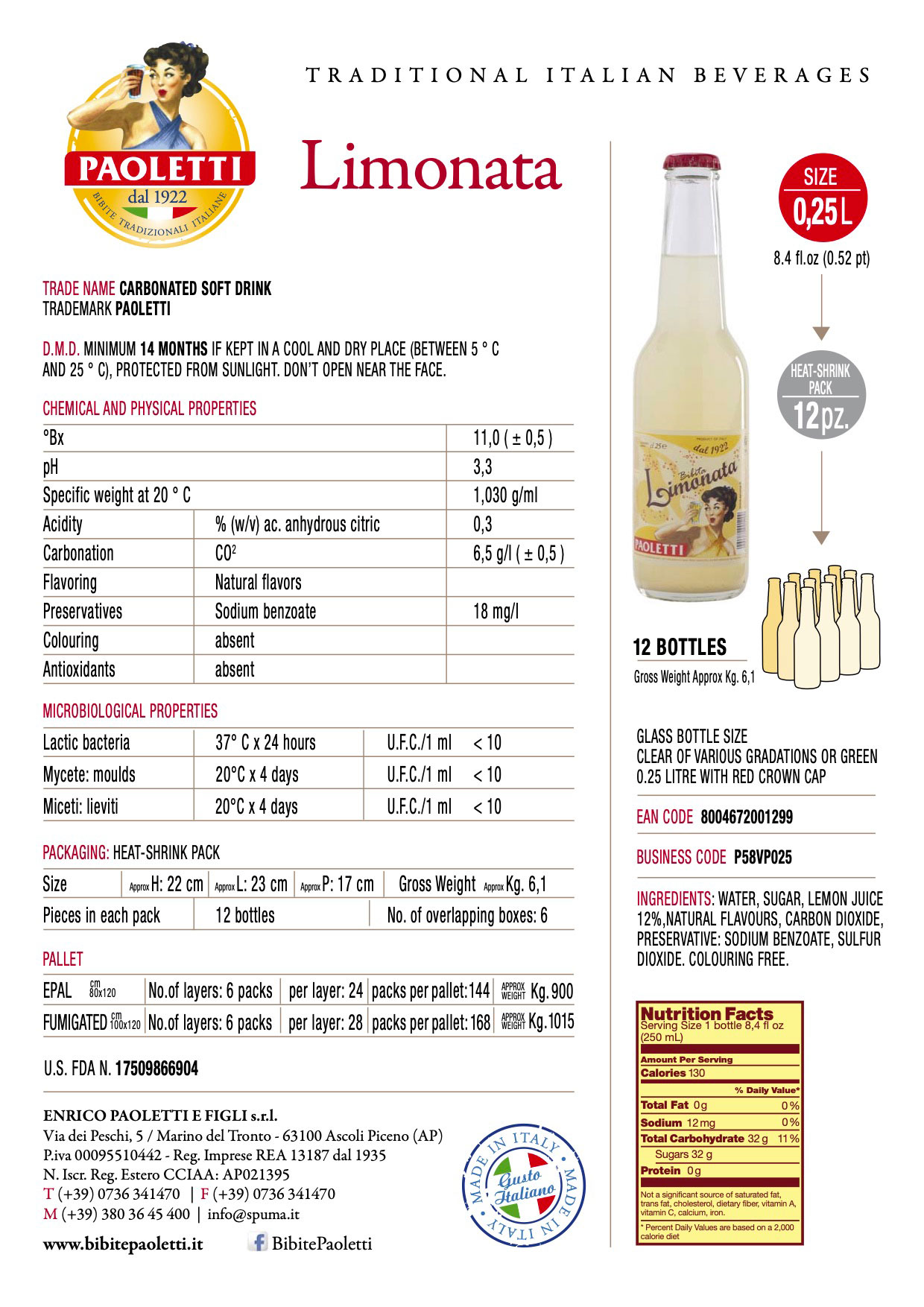 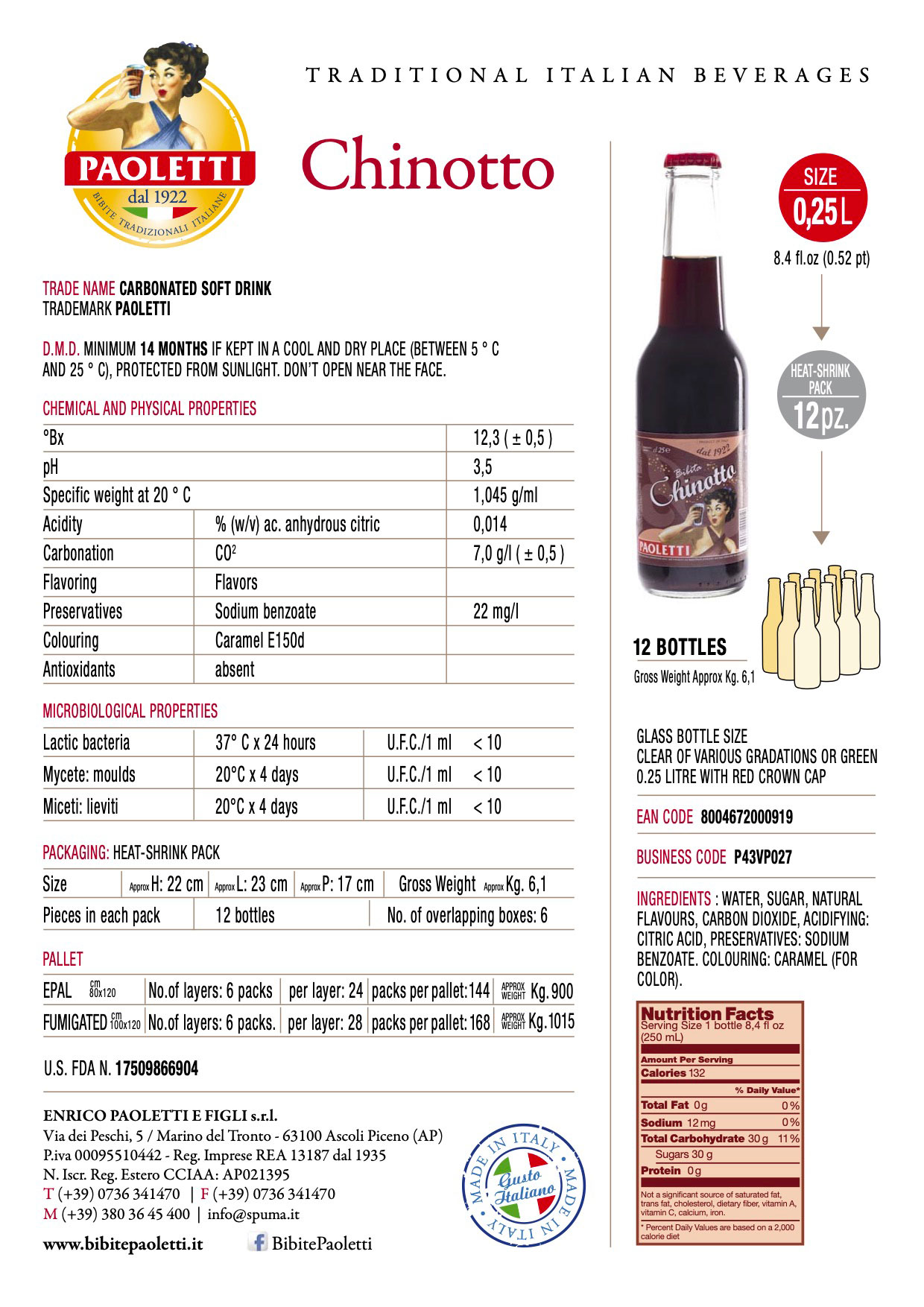 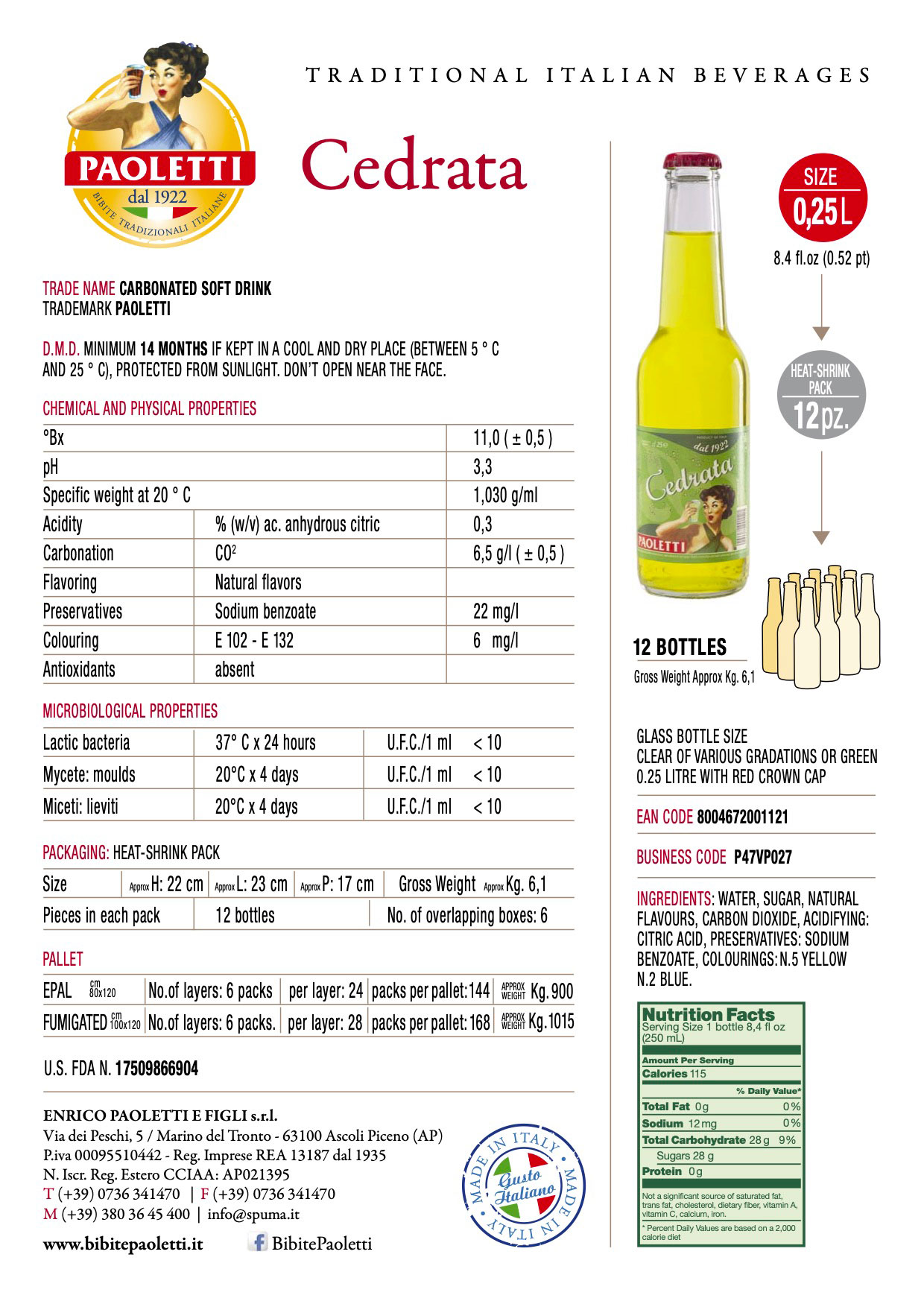 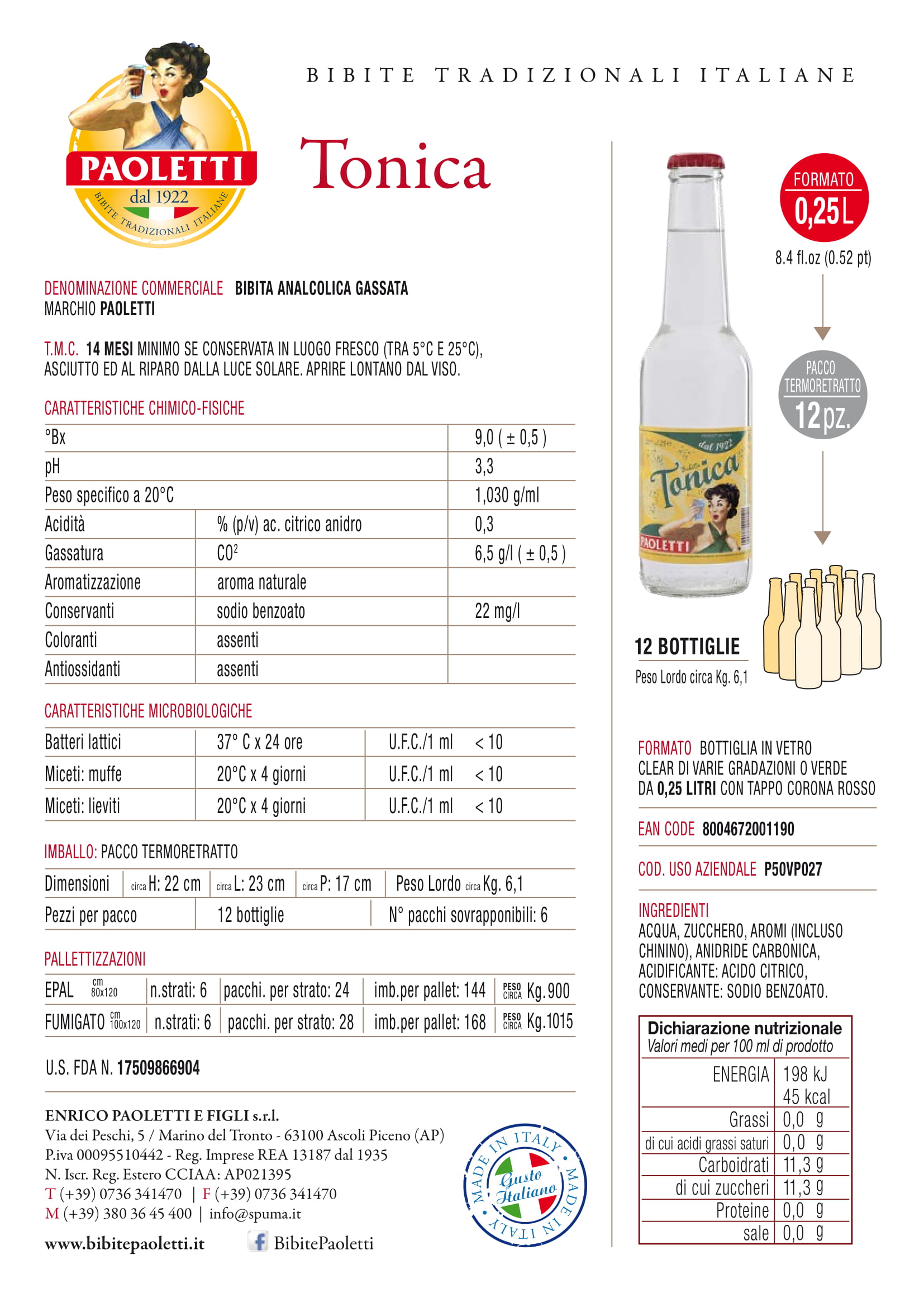 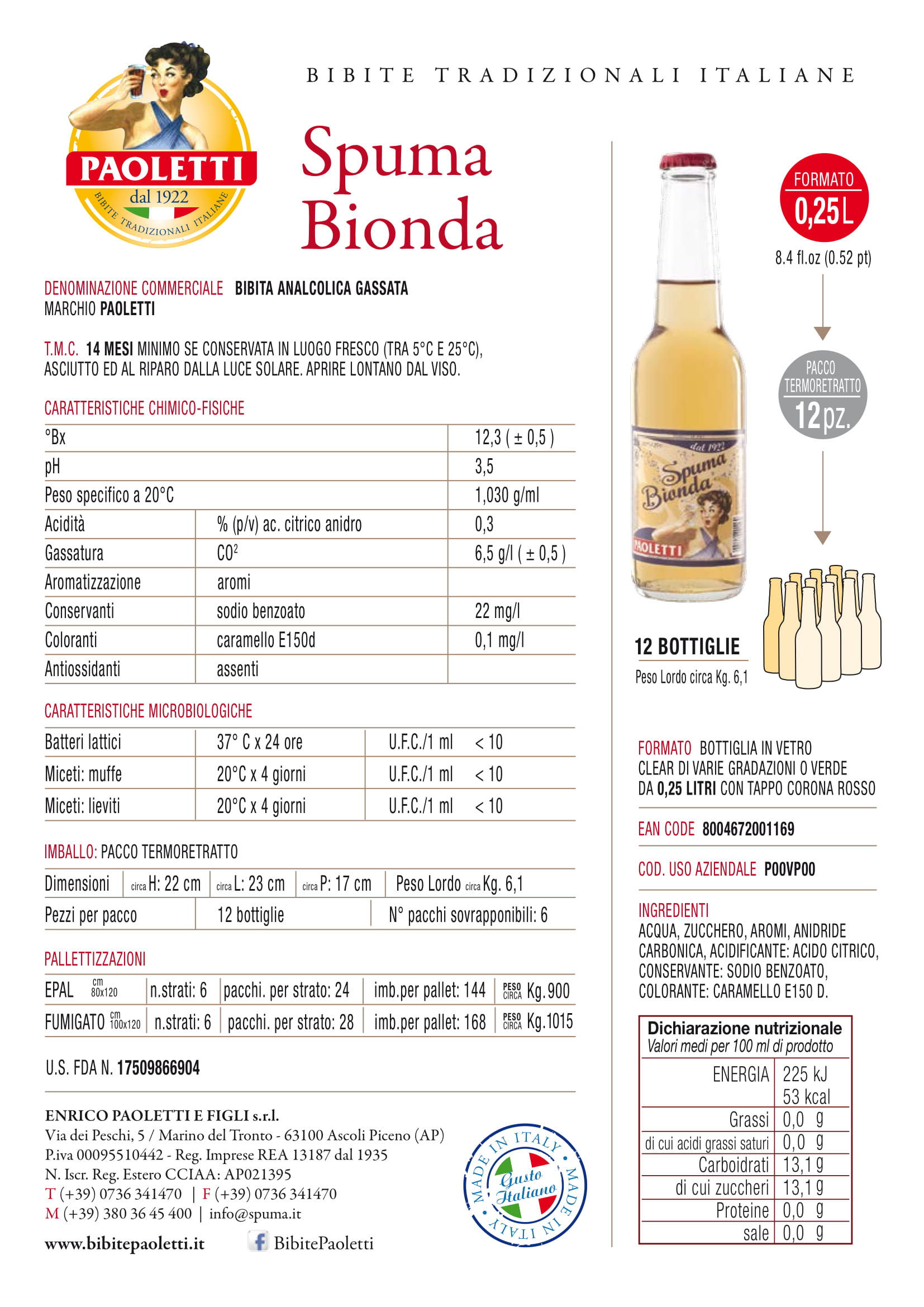 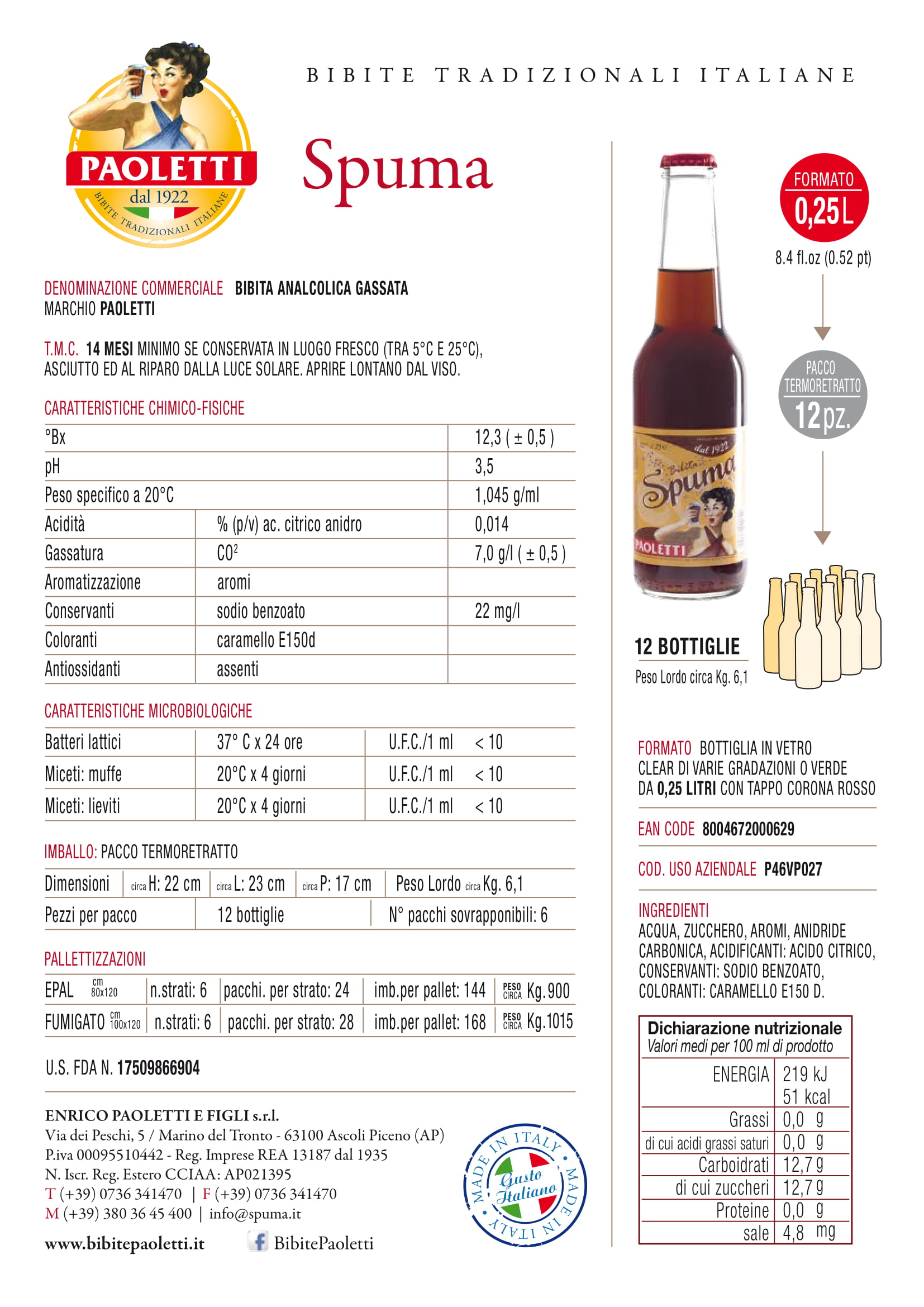 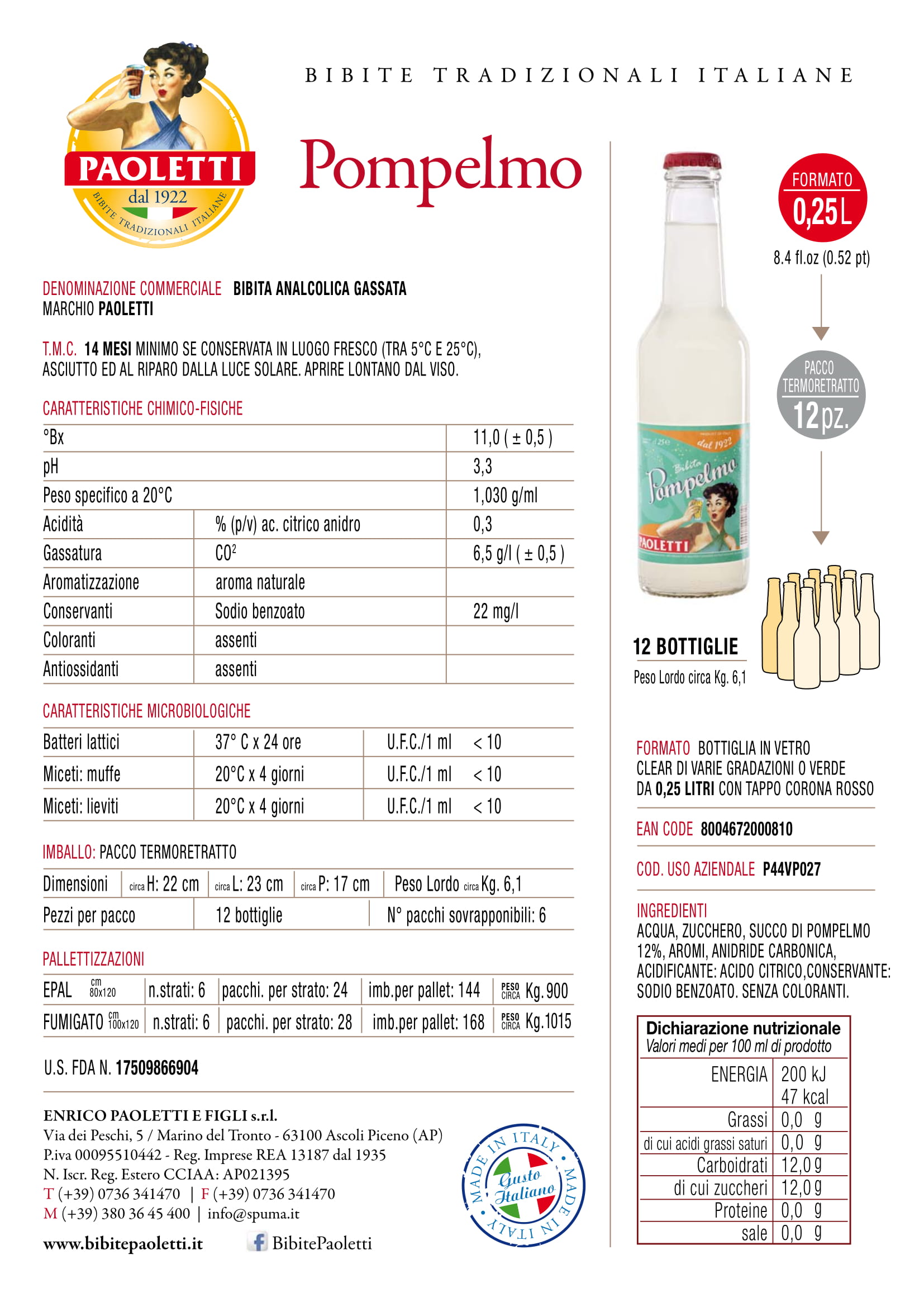 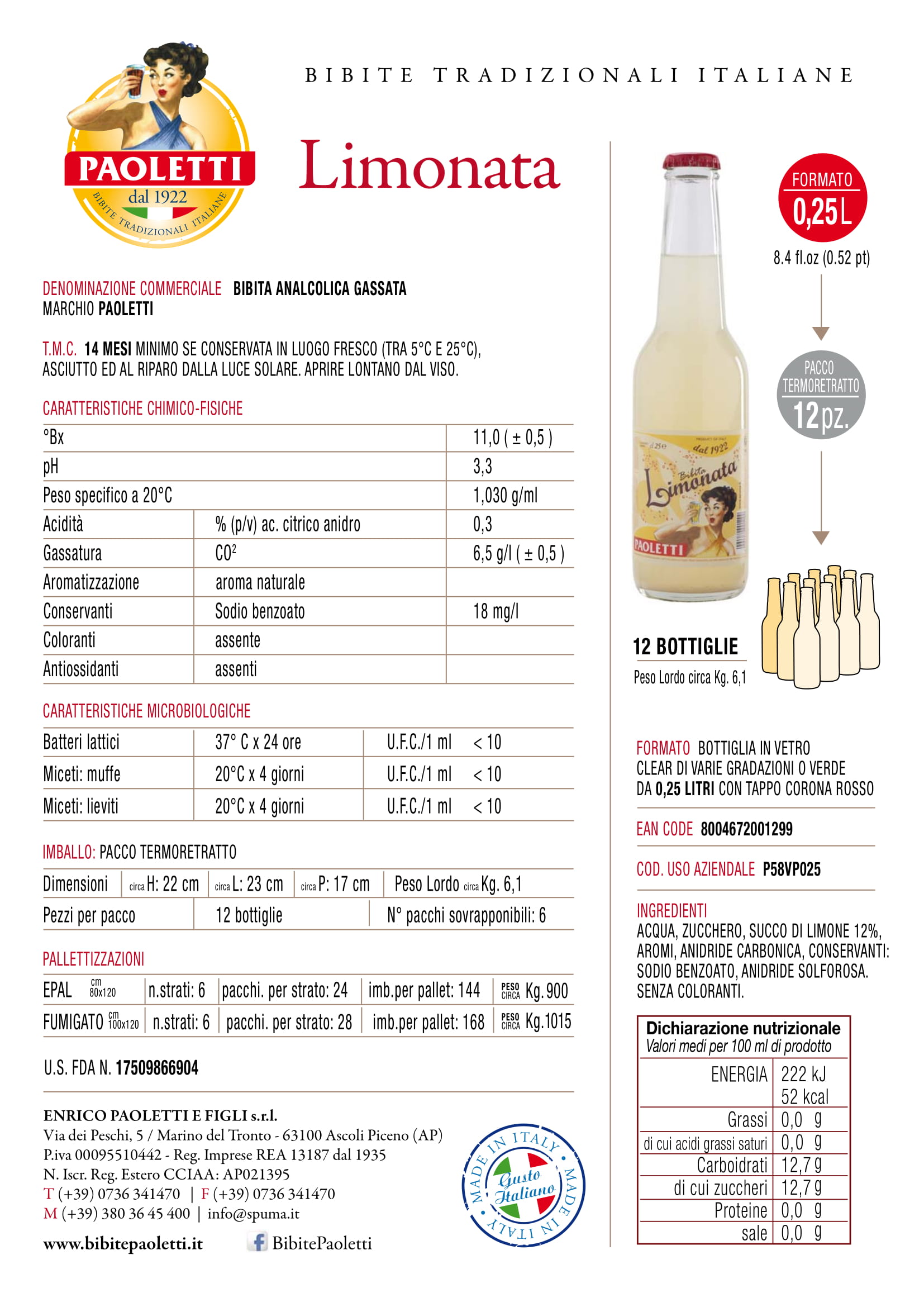 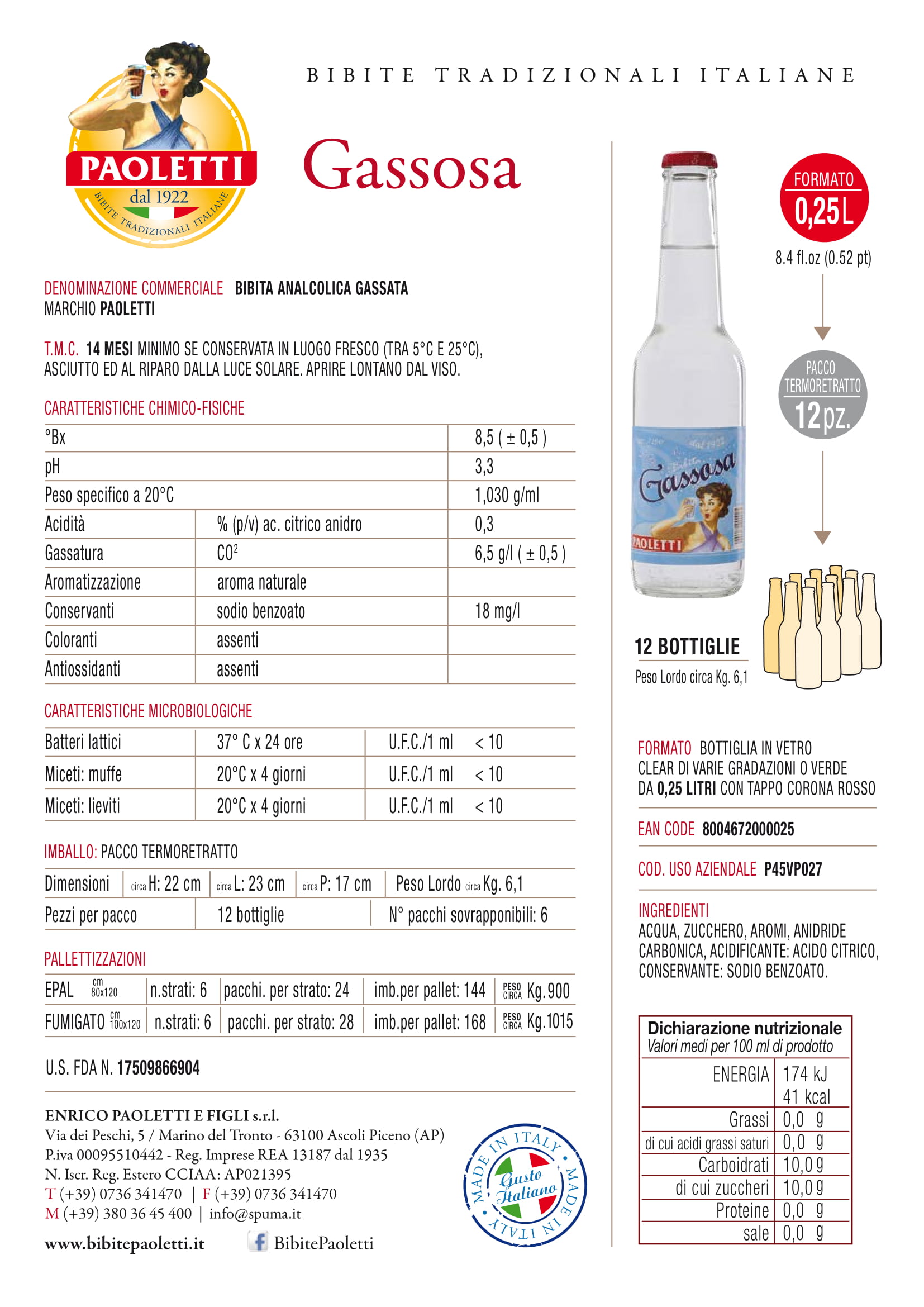 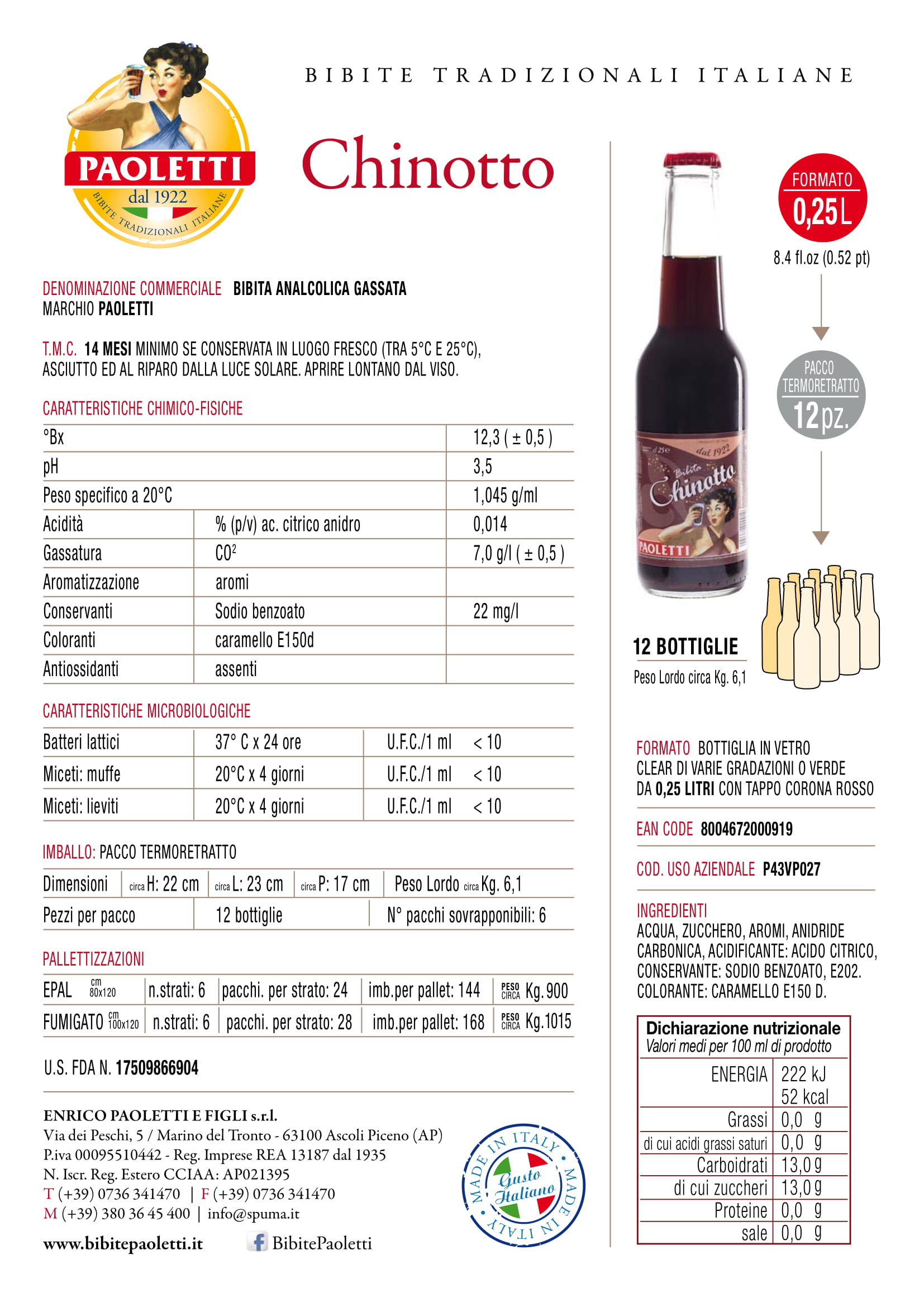 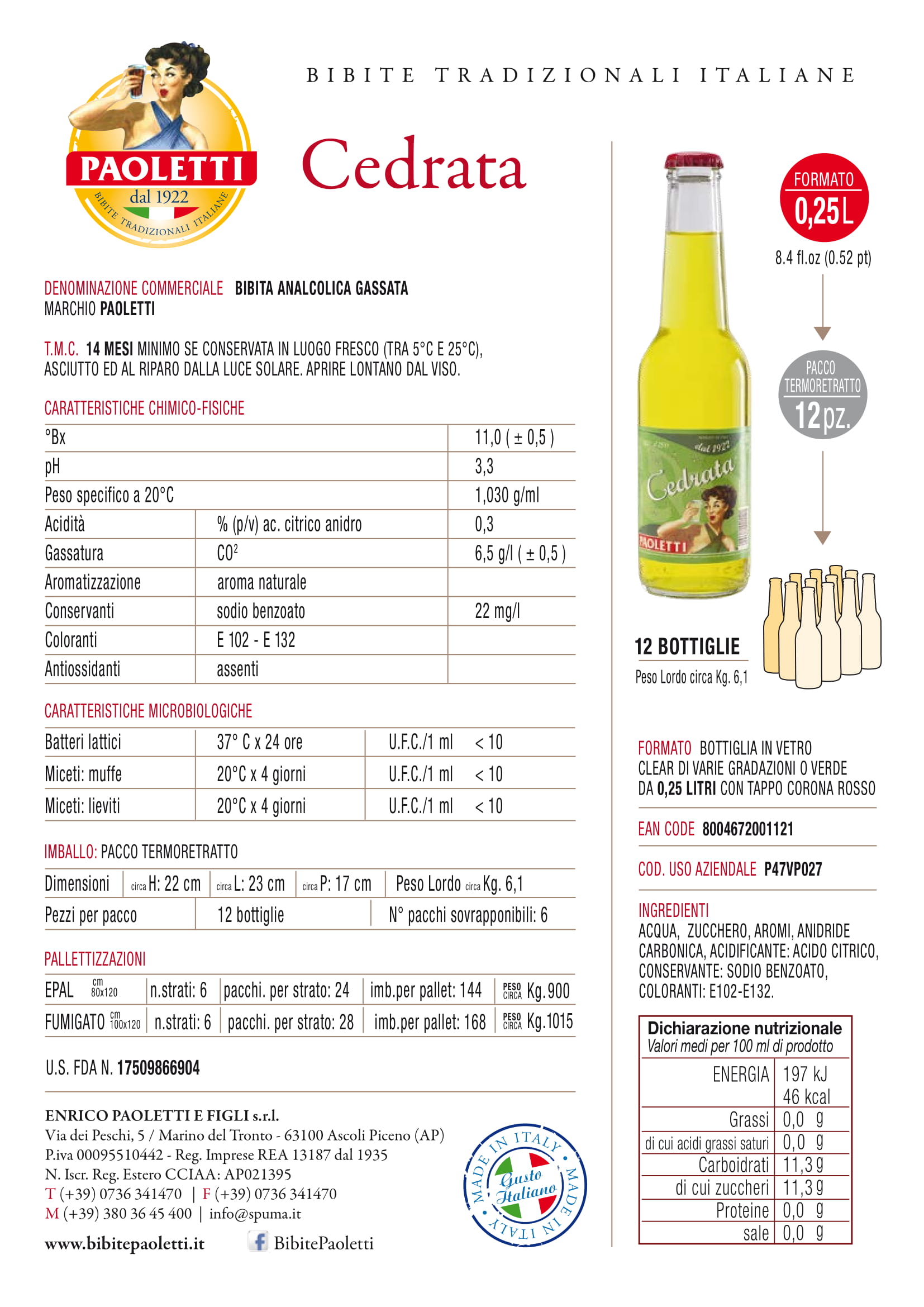 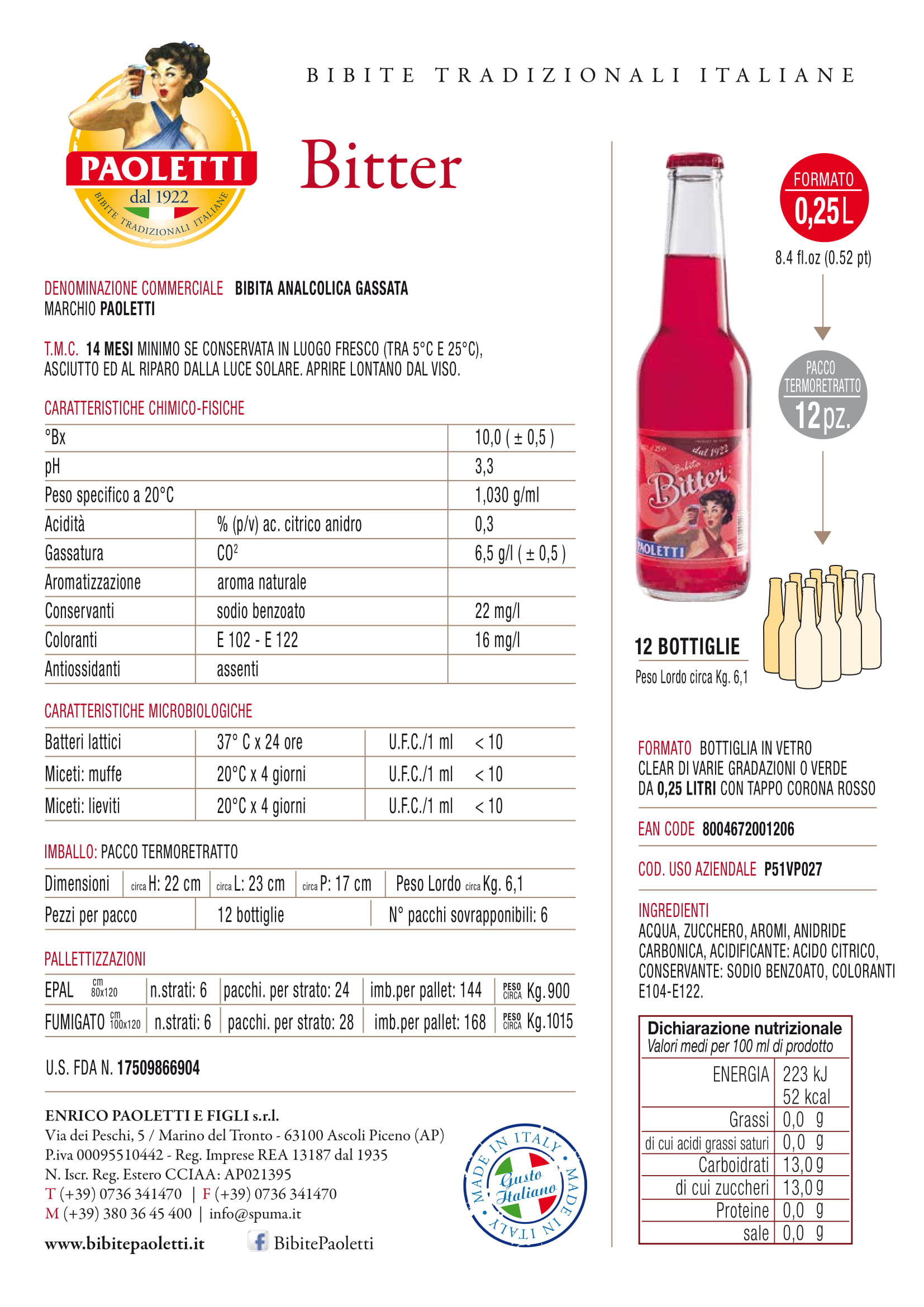 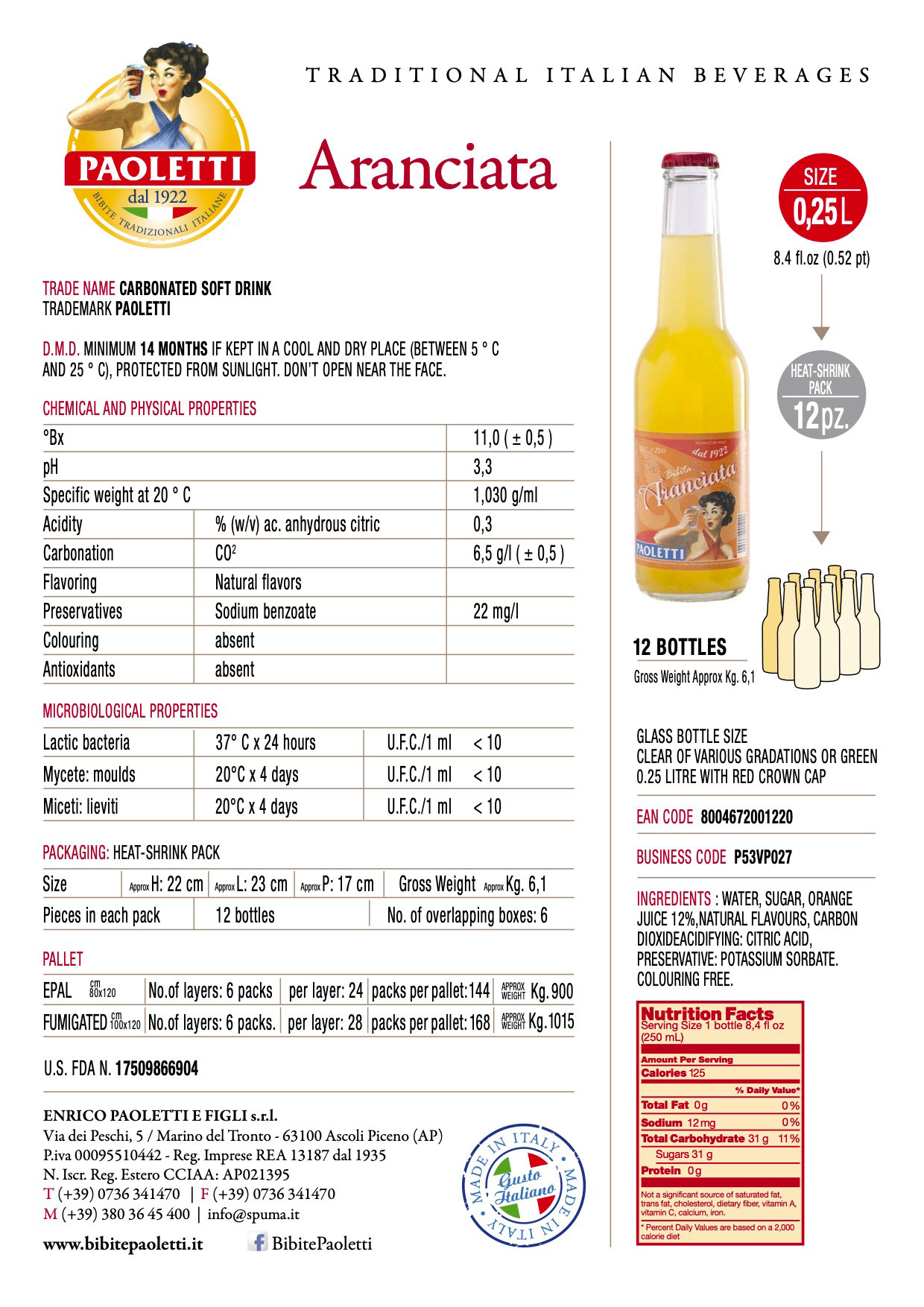 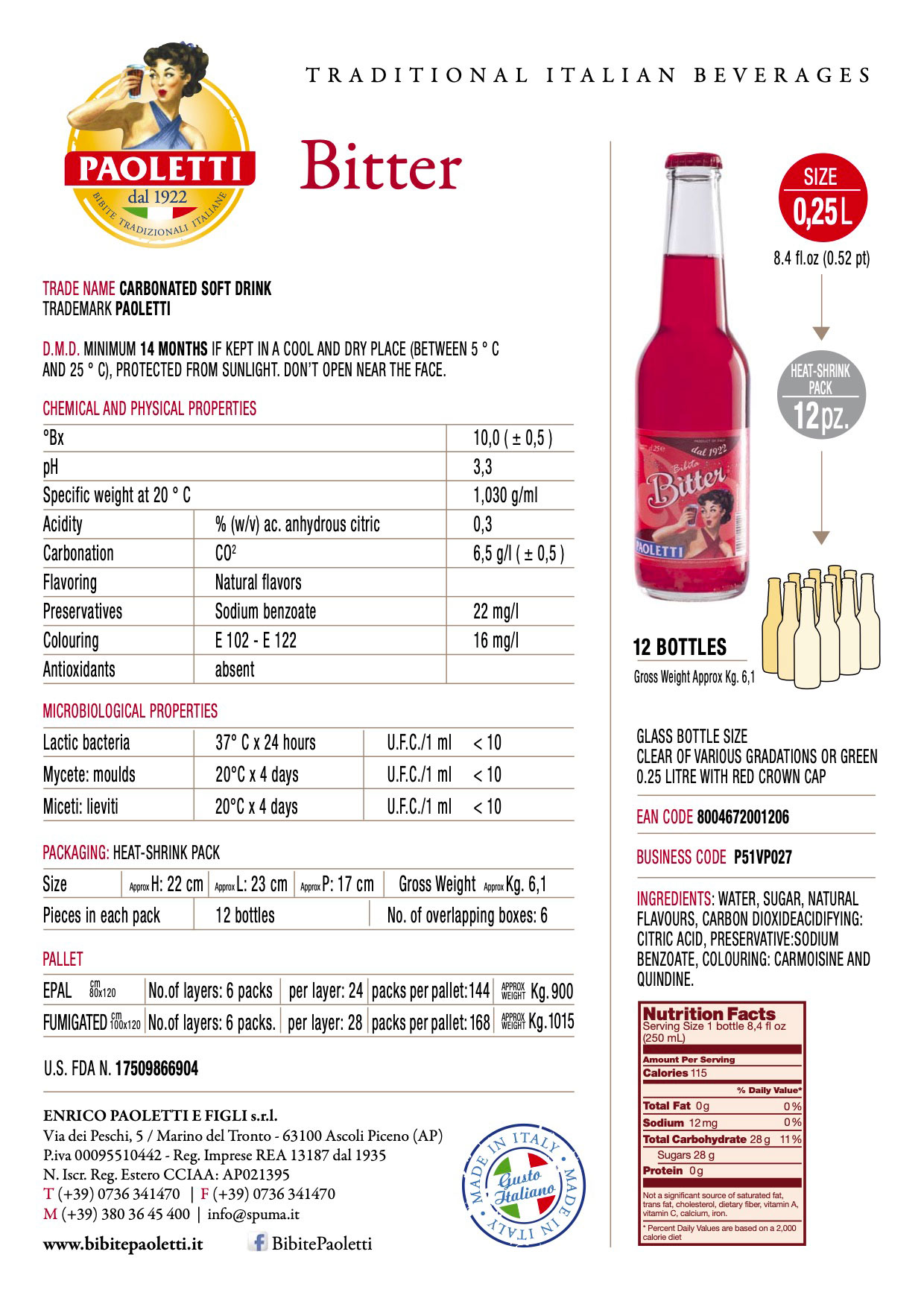 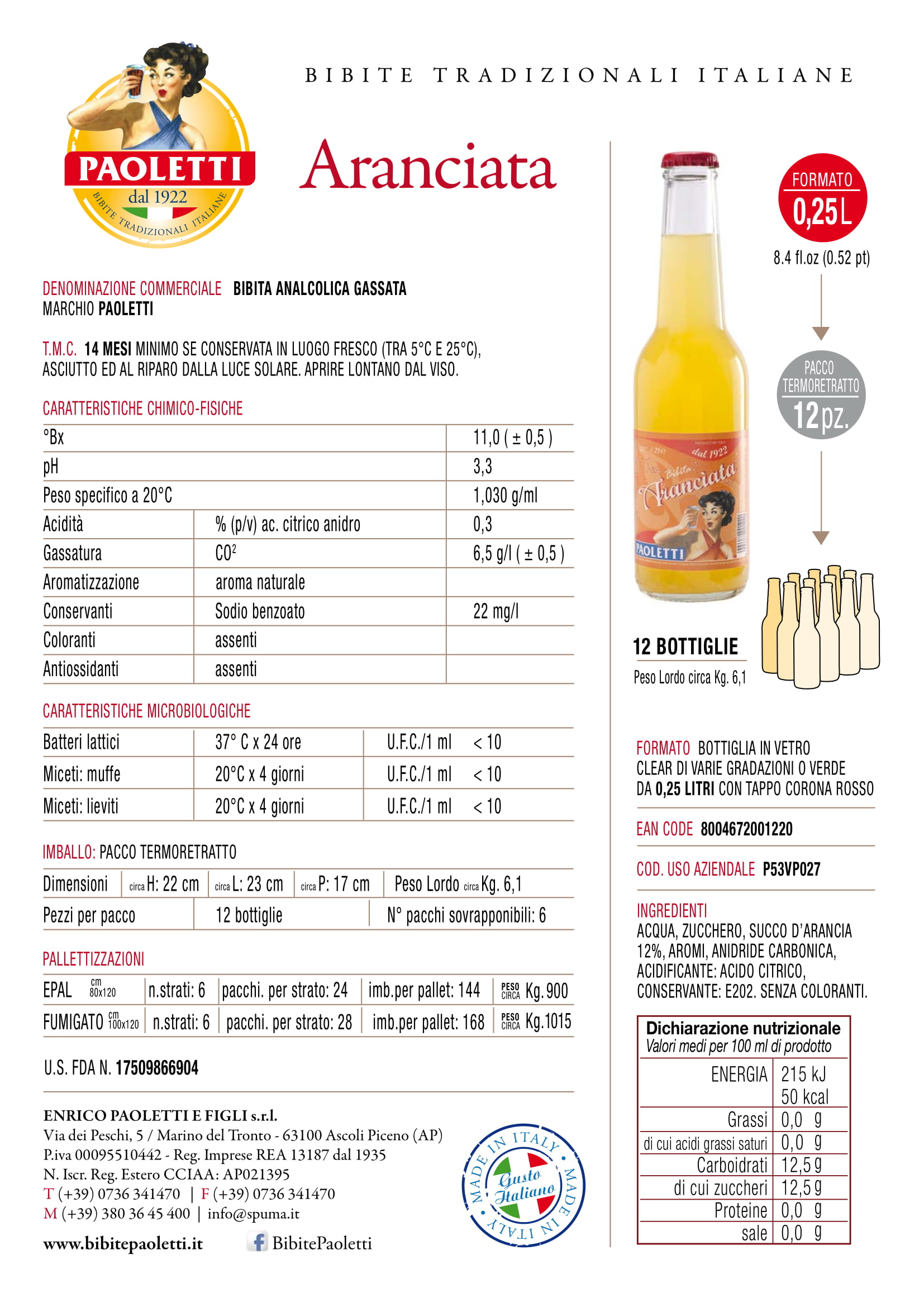 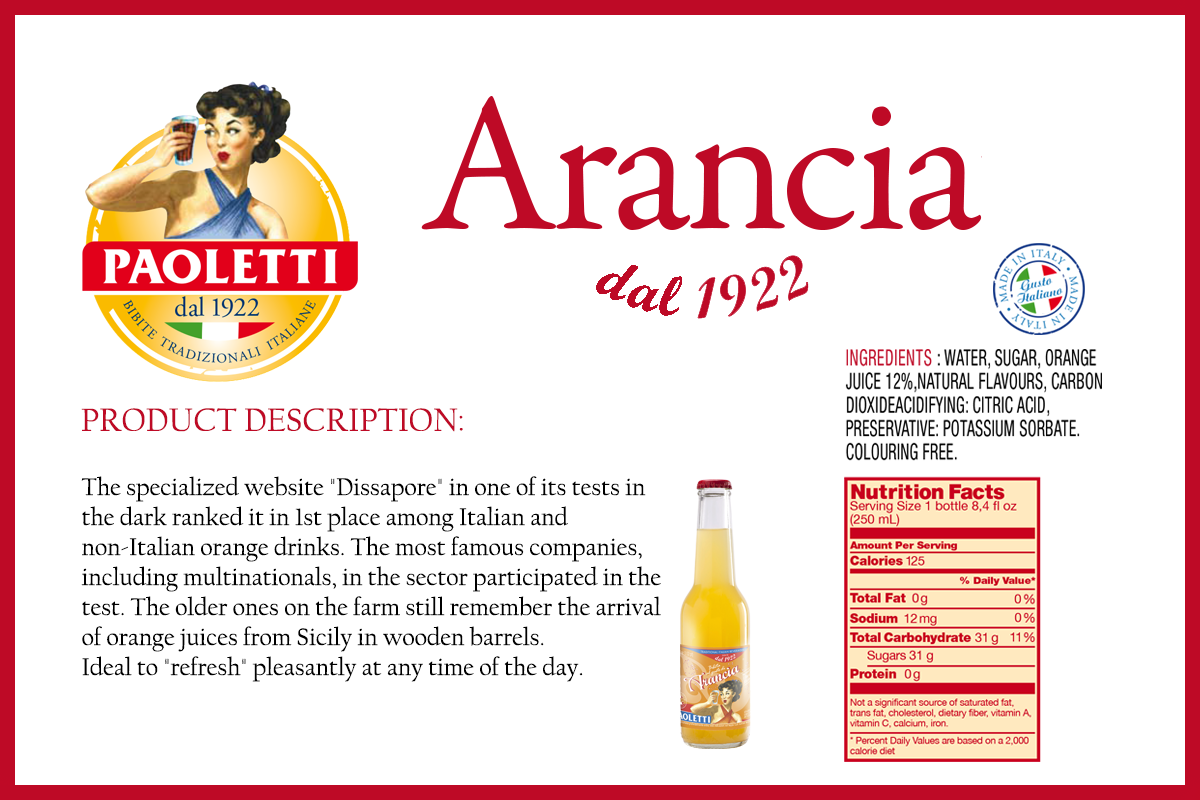 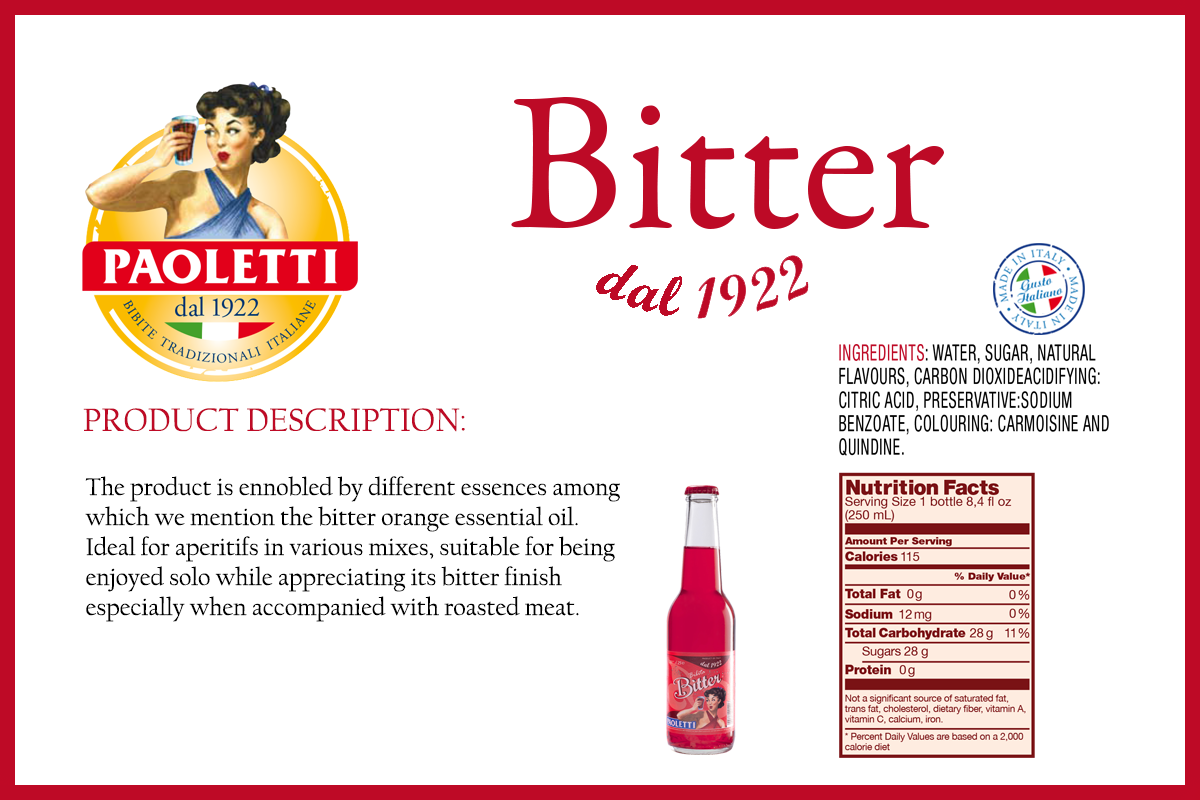 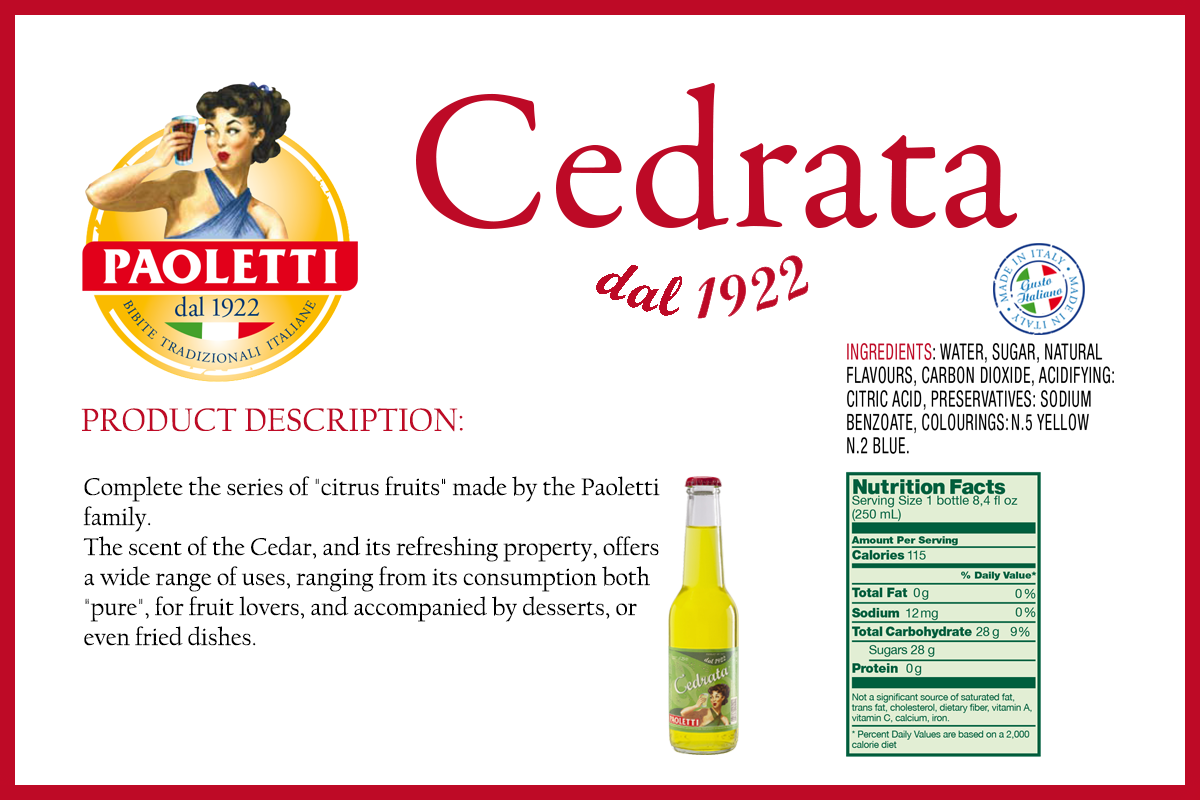 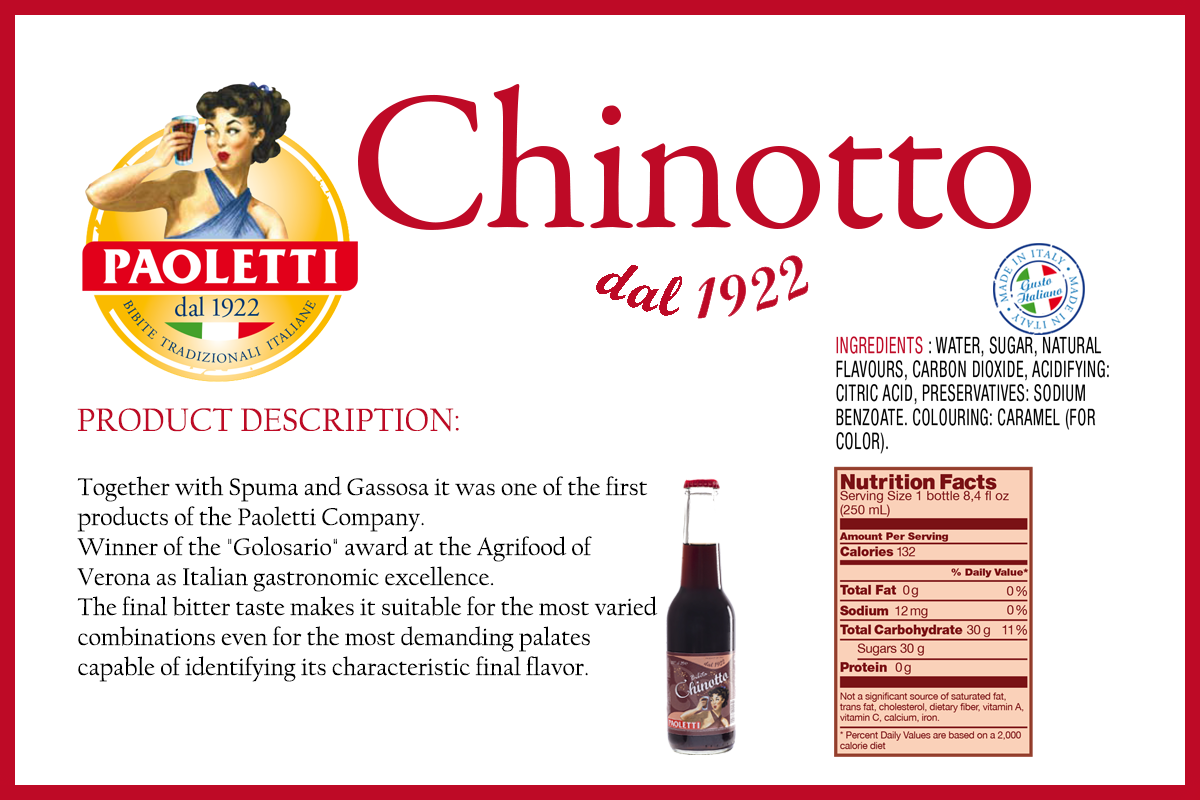 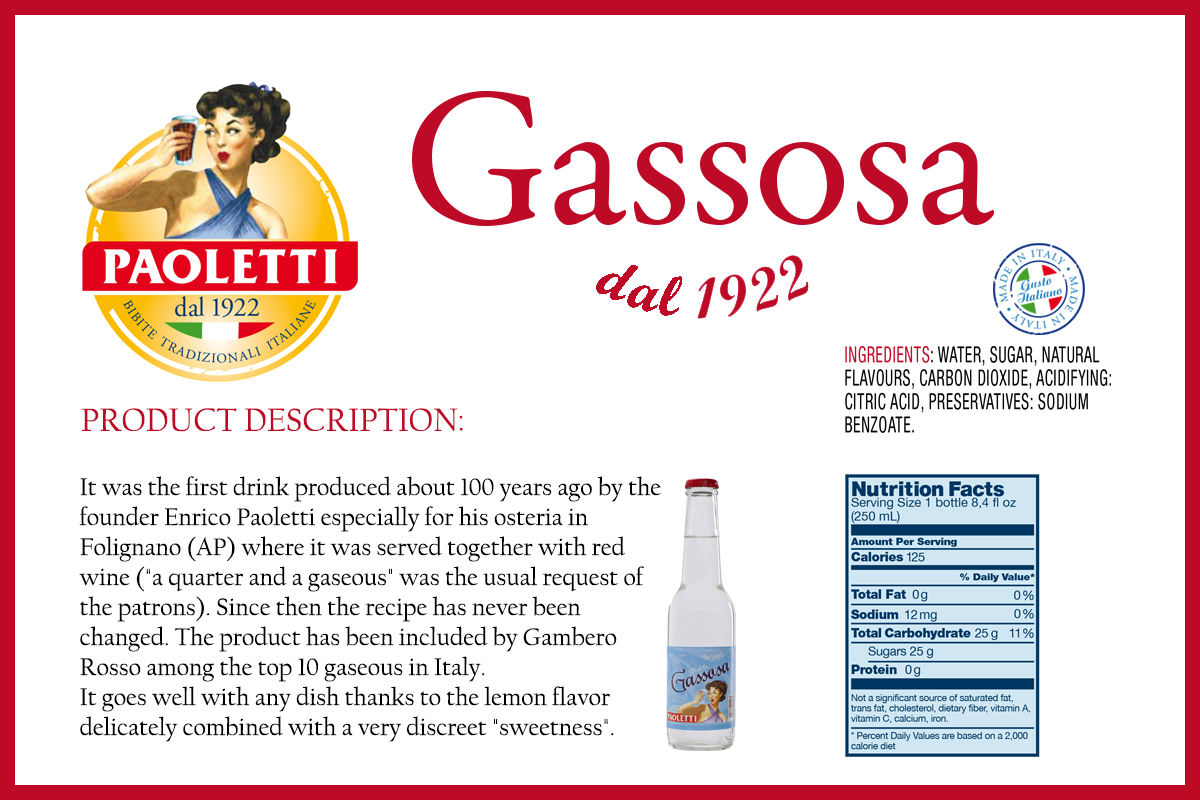 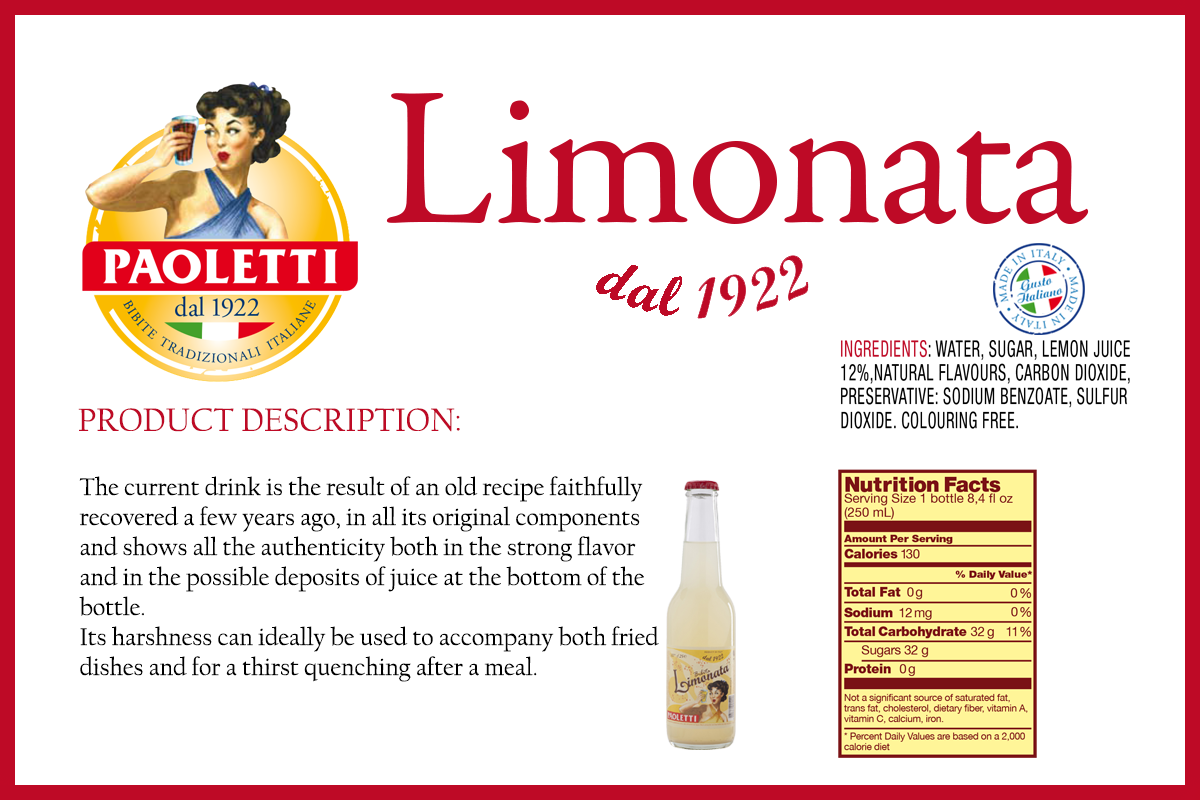 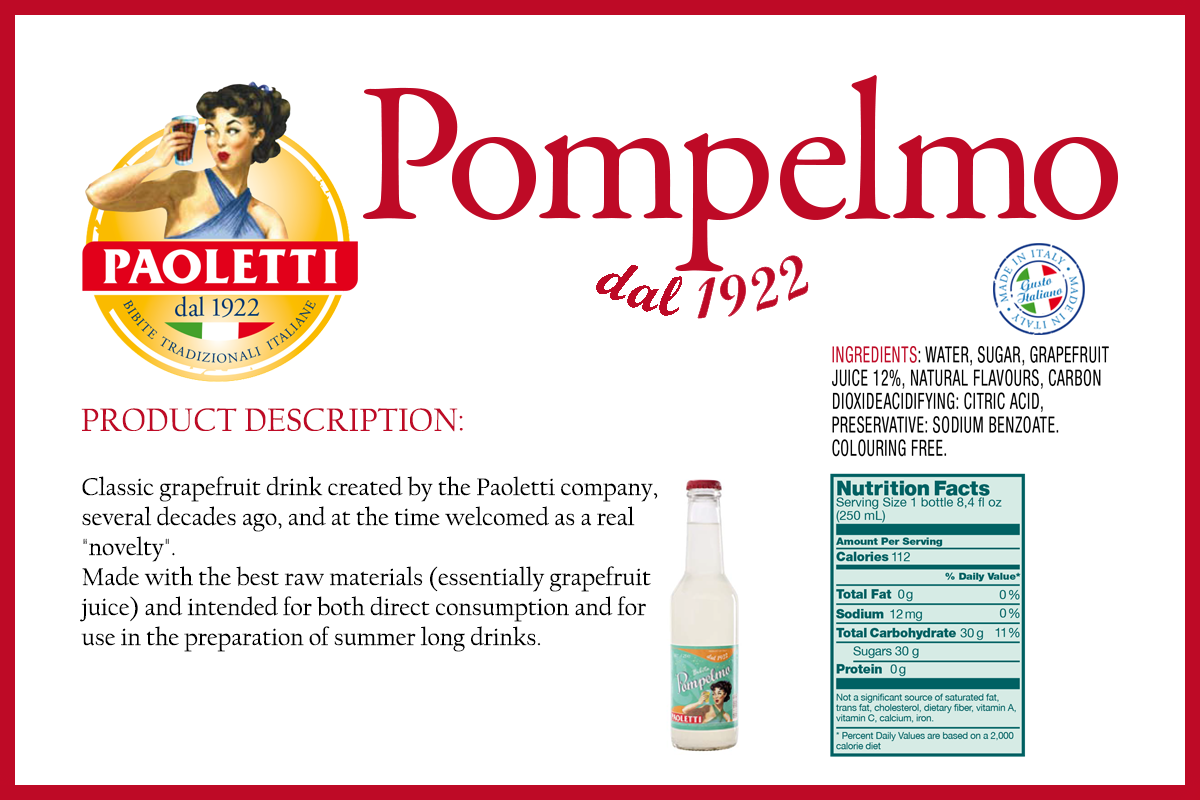 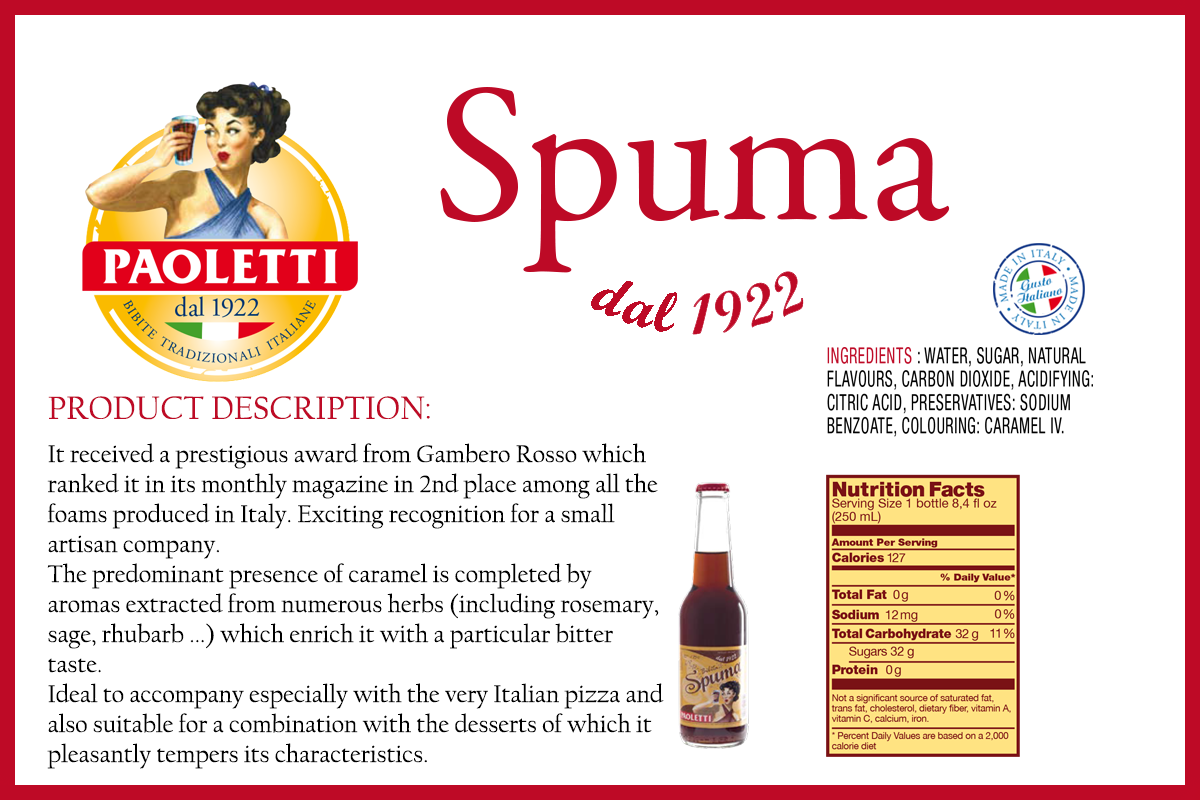 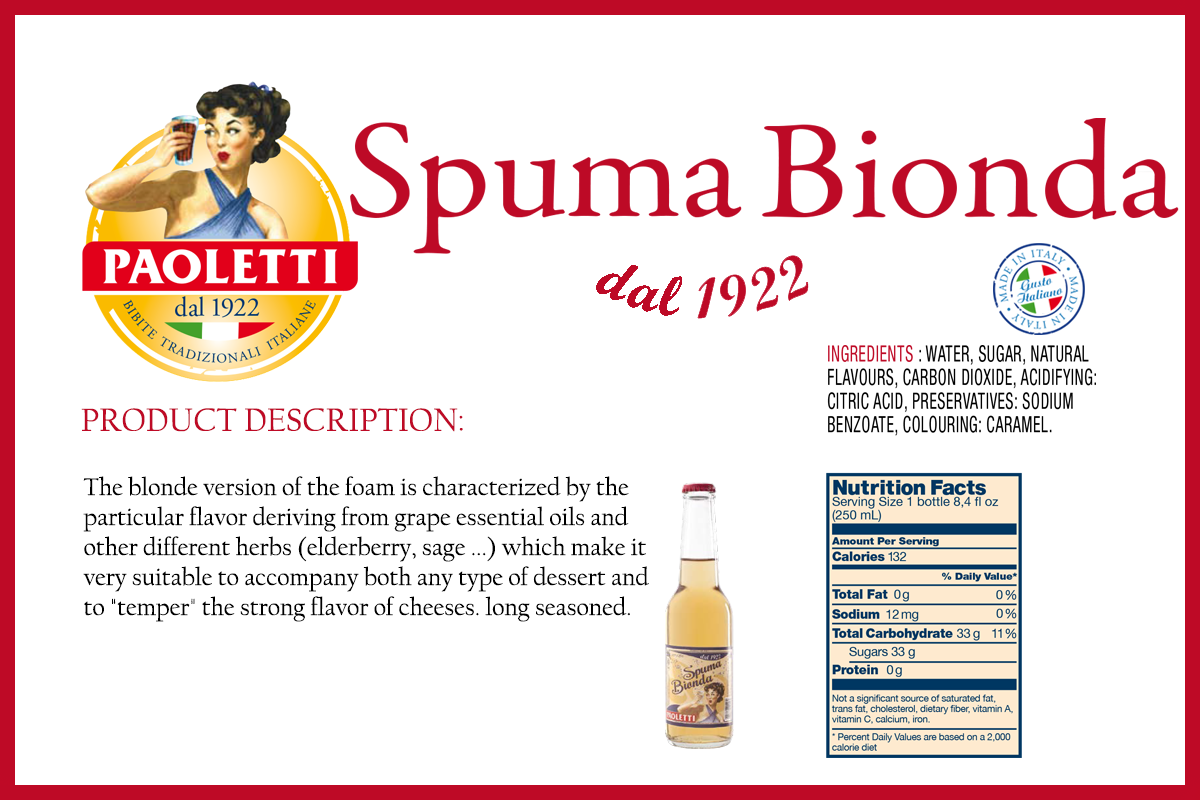 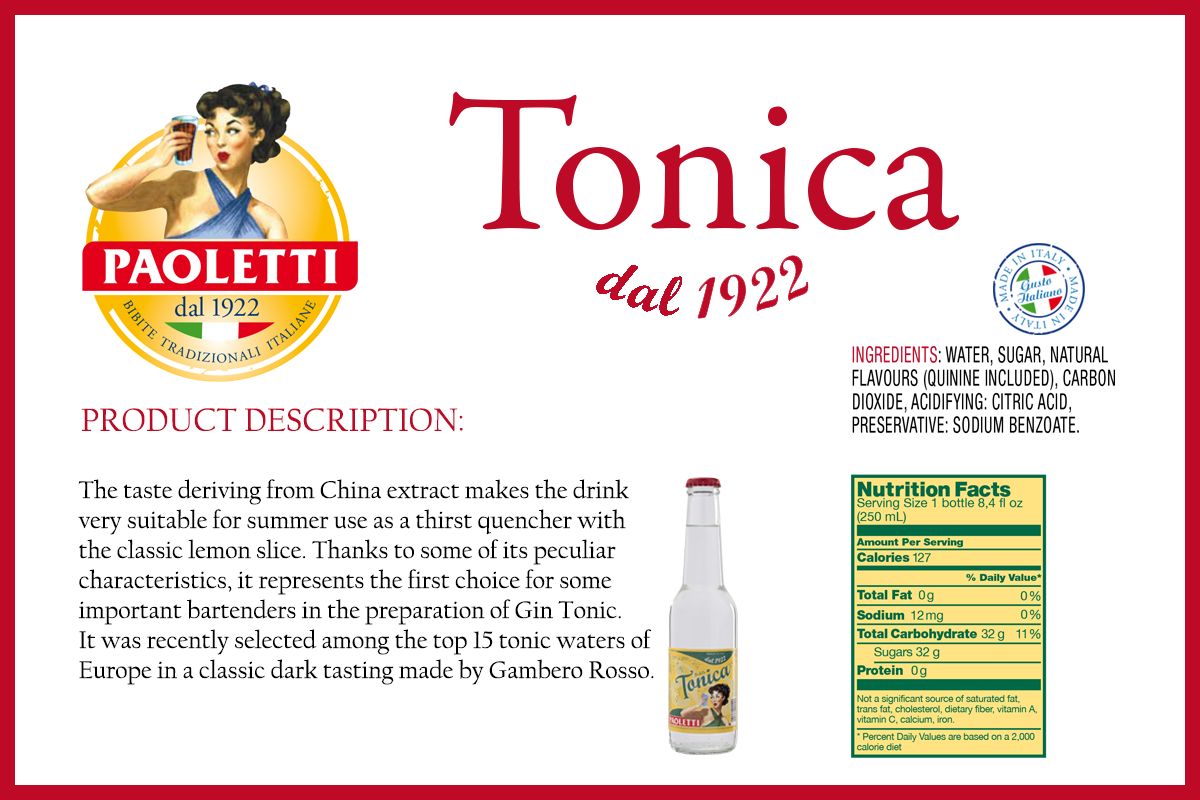